The Roots of 808 Wellness

808 Wellness may have opened on Maui on January 1, 2016, but the dream and vision were born years before by owners Sara and Alan Schroepfer. They met in Minnesota in 2008 as the winter thawed into spring. Connected through a mutual friend while Alan was attending the American Academy Acupuncture school of Oriental Medicine, the two started sharing Sara’s newly opened Santosha Healing Arts Center in the heart of Saint Paul in the Twin Cities, offering massage, energy medicine, holistic classes, and retail. Alan was a veteran therapist and Sara had recently graduated massage school. Both were advancing their professional training, Alan with Acupuncture and Sara with the Healing the Light Body at the Four Winds Shamanic Practitioner Program. They bonded over their shared philosophy of healing and wellness, as well as adventure and travel. Not long after they met, the two embarked on a two-week motorcycle camping trip around Lake Superior and before long, marriage. 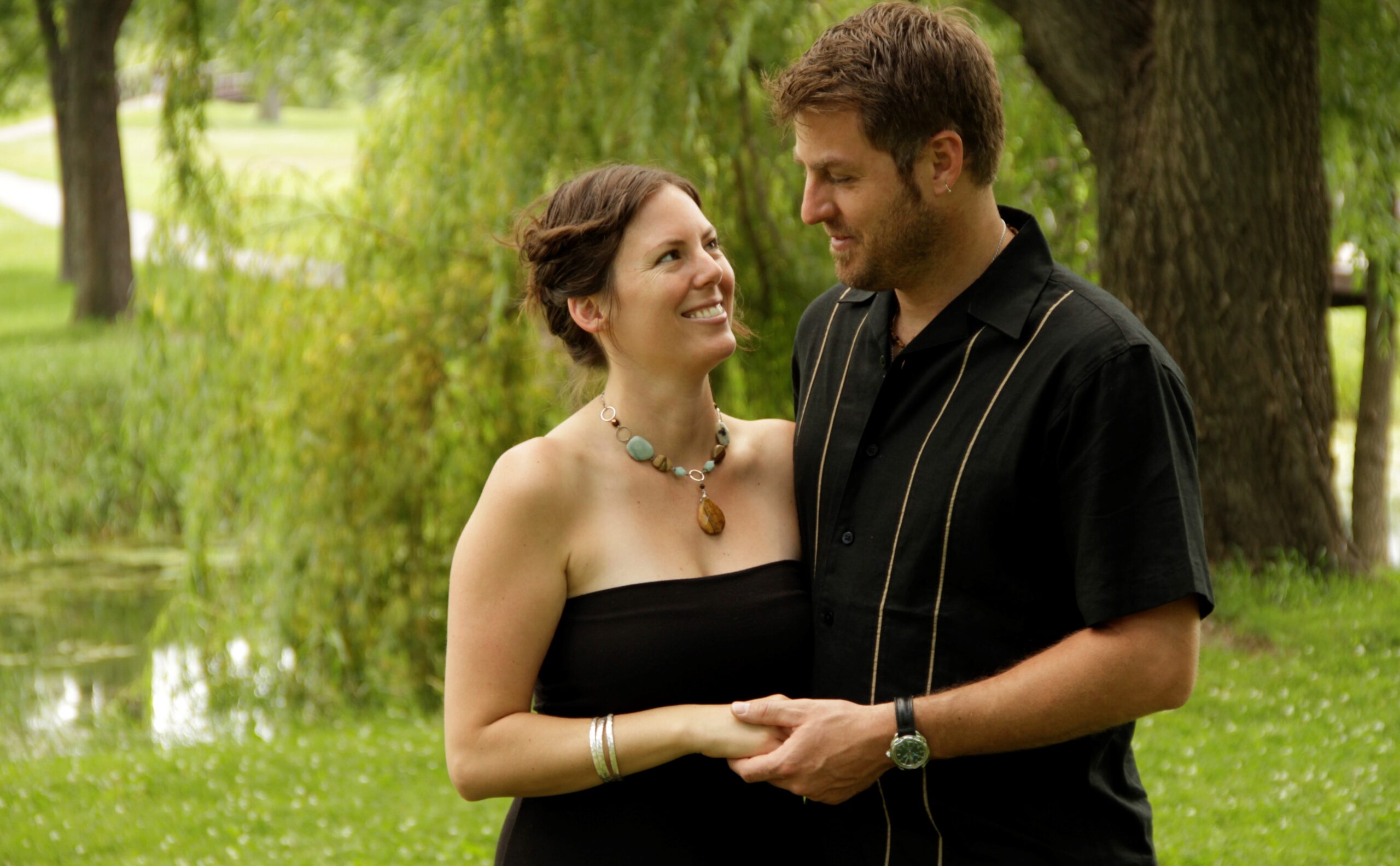 The two have shared business space since they first met. Alan had been living in Maui since 1996 and was a homeowner, returning to Minnesota in 2005 to be closer to family while he returned to school. Sara had grown up in the Midwest and graduated from the University of Minnesota, additionally living in Northern California to India and back and was open to trying life on Maui when Alan graduated. Once the move was agreed to, they let go of the quaint yellow cottage with cobblestone sidewalks known as Santosha, a Sanskrit word for healing and contentment and moved their business into a Natural Medicine Clinic with Dr. Josh Hague, a gifted chiropractor. They also  briefly worked out of a personal injury clinic called, “The Pain and Wellness Center.” Conversations ensued on the law of attraction and how focusing on pain would beget more pain. They both contemplated, why not just focus on the end result and call it a “Wellness Center?” Herein the idea was born before they were aware of where that concept would lead them. 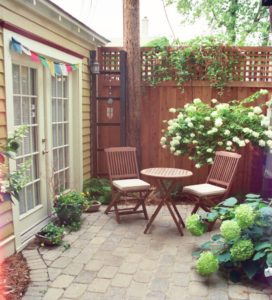 This vision had a few more years to become realized. After getting married in Minnesota and the move in spring of 2011 back to Maui for Alan, the first time for Sara, both began work at The Four Seasons Resort Maui Spa in Wailea. Alan had been a massage therapist there for years before his further schooling and Masters in Traditional Chinese Medicine. He returned as an Acupuncturist. Sara, waiting to take the Hawaii Massage board exam, began as a Spa Coordinator at the Four Seasons. After the birth of their first son in 2012, she returned to the spa as a massage therapist after taking some time off, now being able to spend more time at home raising their child in this position.

In these in-between years, both cycled through a variety of Maui offices, spas and wellness settings trying to find a place to call professional home. Both yearned to create their own space but the challenge therein lied with their high standards, laid down by their previous freedom as business owners and their extensive training at the Four Seasons Five Star Resort. Then one day, two months after the birth of their second son in 2015, a destined run-in with a colleague of Alan’s relayed that there was rental space open in her office building at the Rainbow Mall in South Kihei. It was formerly the Face Place, an aesthetics office with soundproof walls, a lobby, and two-treatment rooms. While a financially risky time in their life with a newborn at home, they did not hesitate as the location and layout was perfect for the couple. Two-weeks after viewing they signed a lease and started renovations, opening six weeks later. 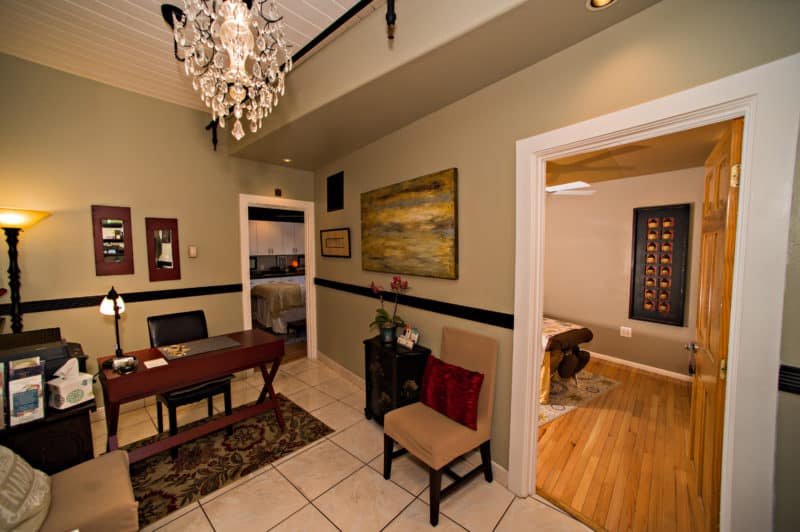 Often referred to as the couple’s third baby, the pair spent time transitioning their individual Maui business identities into a merged one. Alan had created Akamai Acupuncture upon return and Sara simply added Santosha to her name and focused on the Spiritual Therapy Program she had developed over the years since her training. They played with the name MANA Center, an acronym standing for “Maui Acupuncture and Natural Arts,” and yet that just didn’t resonate fully. One day Alan simply suggested, “808 Wellness” and it stuck. Soon, a few massage therapists joined their space as renters, and the business began to flourish. Living Aloha magazine featured them on the front cover with an article on their opening and they became immersed in creating 808 Wellness. 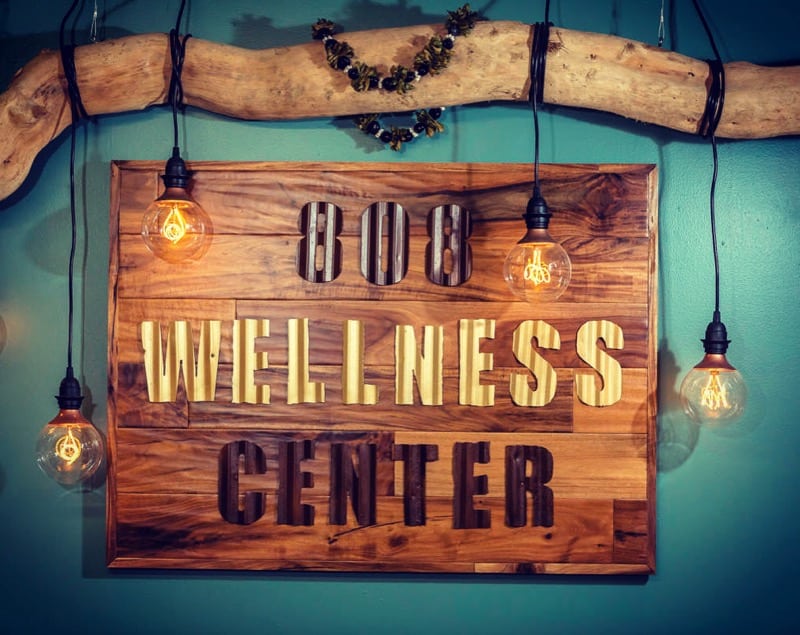 Four months after opening, the late building manager Nancy stopped by and asked Sara how things were going. She responded, “Better than we expected, business is going great!” Nancy let her know that there was another space open that was bigger if they thought they would like to ever expand. Sara did not hesitate and asked to be shown the space. It was the corner unit in the larger building of Rainbow Mall behind Café O’Lei. Sara walked in and the first thing she said was, “Uh-oh Nancy, Alan is not going to be happy with you… I love it!” Nancy laughed and said, “Just let us know when you are ready!” Two weeks later, they had secured a business loan and were signing a new lease, the second one within six months. 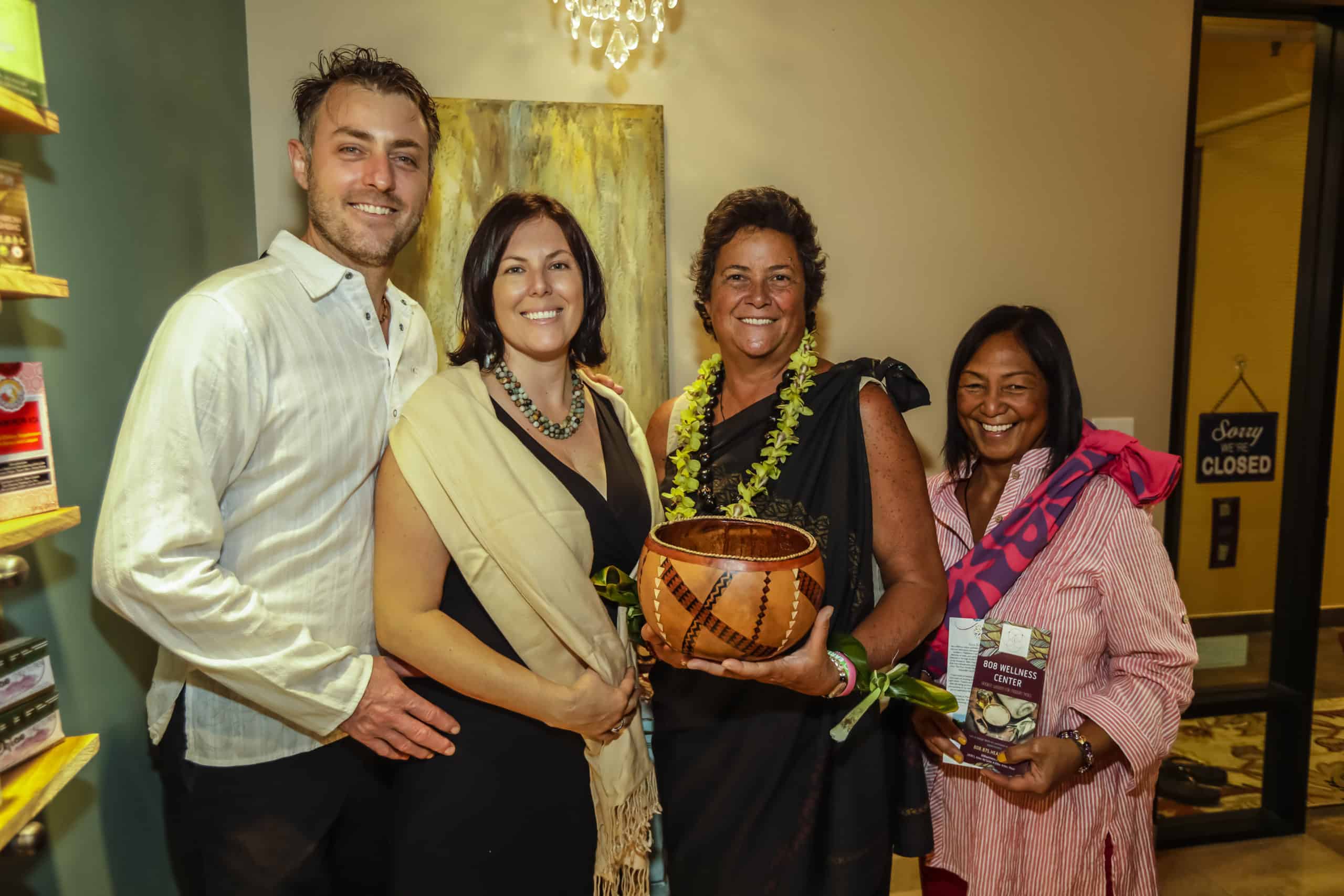 The location was beautiful. Lots of windows and natural light with a beautiful lobby big enough to hold small classes, structure for four treatment rooms, an office room, a storage room, elevator access, travertine floors, a wrap-around balcony; all boxes were checked. This was the dream, the vision. Front desk staff was brought on as well as massage therapists upon opening. Now ten years into their deeper work, both Sara and Alan were ready to let go of doing massage themselves and focus on the work where their greater gifts are offered: Acupuncture/TCM and Shamanic Healing. This time around a Grand Opening celebration took place on December 2, 2016. A sacred blessing by Lei’ohu Ryder and partner was given and a number of their supporters, friends, clients, and media representatives attended. A night to be remembered by all!

THE EXPANSION: THE STUDIO

808 Wellness Center took on a life of its own and became bigger than what Sara and Alan could be on their own. Talented massage therapists were brought on and a variety of wellness practitioners, including astrologers and other specialty services. Classes and events began to flow such as Chinese Medicine, Aromatherapy education, Yoga Therapy, Wellness Fairs and more. As attendance grew, a larger class space began to be desired. Hoping someday the space next door would open up to allow for natural expansion, the couple discovered the Universe had other plans!

One day, Nancy stopped by and Sara asked about seeing the office space across the hall that was currently empty. As amazing as the bones were, it seemed too large to invest in only a year after the Center was open. It sat in the back of her mind until one day, her Aunt Sandy called and said, “Did you see the property management office down the hall is moving out?” Not having considered this as a possibility, Sara rushed over to see it all the while thinking, “It’s too soon. We’re not ready yet!” 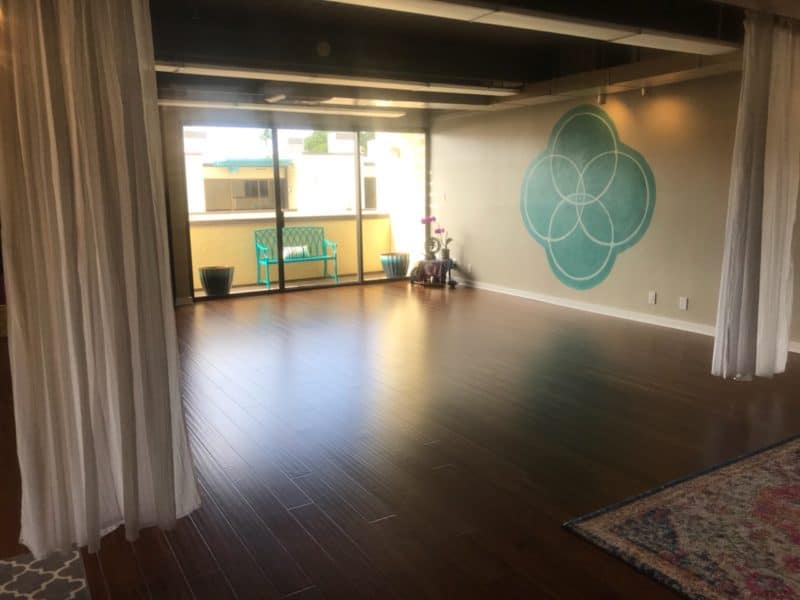 However, the location was perfect and with no hesitation but plenty of reservations, the couple looked at each other and smiled and said, “Here we go again!” Their fourth baby was born as 808 Wellness Studio was opened after less than a two-month renovation by Alan, Sara and some 808 helpers on August 1, 2018. It was good timing to expand upon the Center and 808’s offerings. A full yoga schedule was created by the more recent Wellness Coordinator addition Elise Streckenbein. A yoga instructor with years of experience, she helped guide the couple through the logistics of running a studio. Sara had begun a two-year yoga teacher training in Rishikesh, India in 2005 but ended up pausing it to complete her massage and healing arts training. She finally completed her 200-hour yoga training in 2016 and was beyond humbled to consider opening her own studio.

This was to be more than a yoga studio, however. This was to be a Sacred Space, an events studio that would be a place for transformation, study, education, and expansion for all who entered its doors. After opening, a weekly Wellness Wednesday Speaker Series was launched followed by Thursday Night Journeys, in which varying healing practitioners offer a variety of monthly classes and experiences on each Thursday of the month. Since the doors opened, there have been a multitude of workshops, events, trainings (Yin Yoga, Reiki, Shamanic, Thai massage and more) and Wellness and Healing Arts Fairs. Many of these events are free or by donation and all are open to the public with more offerings on the way. The intention of the Studio is to create a spiritual Sangha, where the community can come together to gather and connect and to become more together than they can on their own. 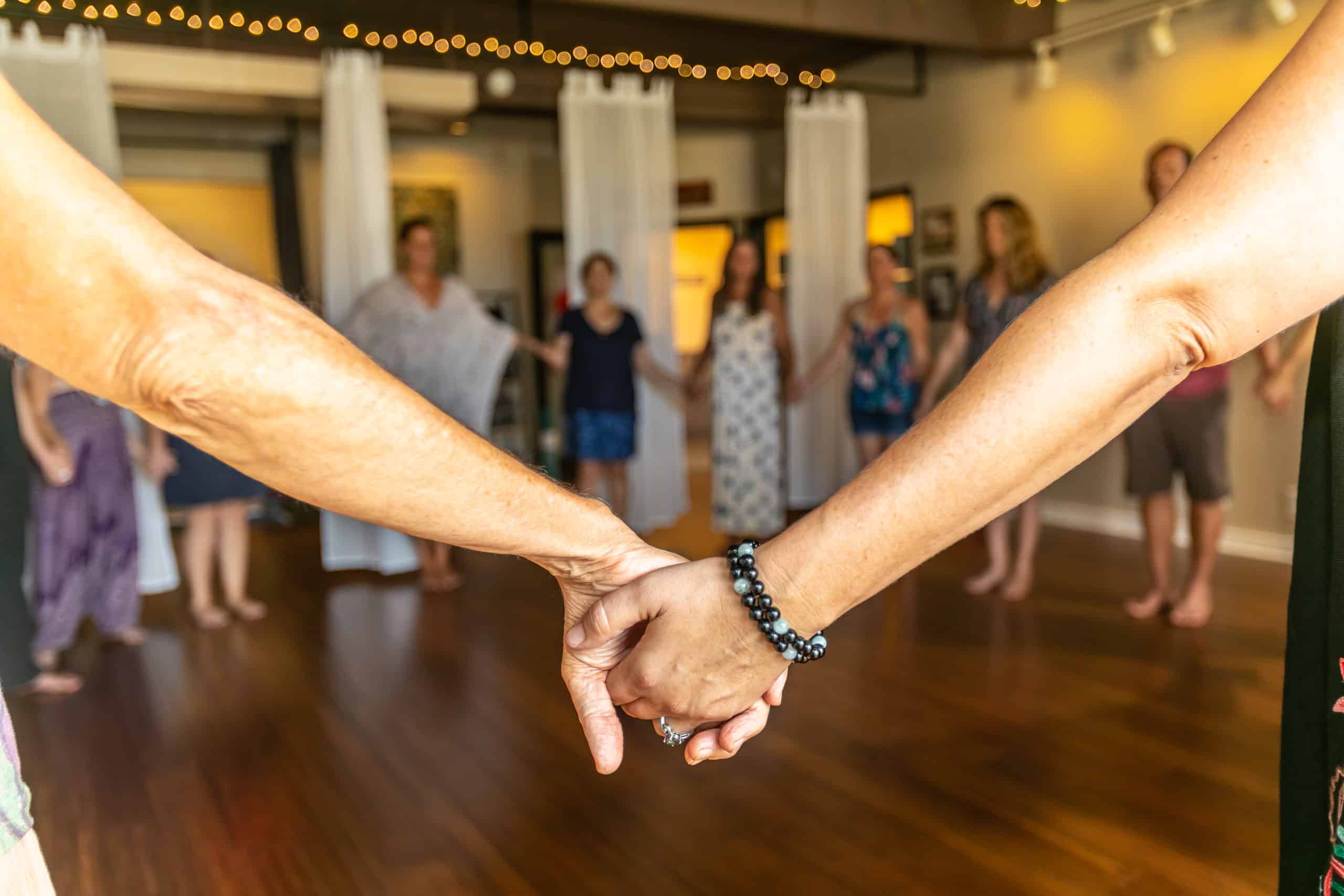 As growth happens naturally in life, it is always good to take a step back and see the whole picture of what has occurred and perhaps why. Early on, Sara and Alan discussed a healing center, a sanctuary, where people could come to heal and seek shelter from the world. Whether their wounds would be physical or emotional in nature, the two were equipped to address both and often worked with their clients and patients together to accelerate healing. Could they have anticipated where their vision would go or how it would evolve? Not specifically. But they are continuously humbled by how it has and continues to grow and assist their community on a much greater scale than they could on their own with a team of over 25 massage therapists and acupuncturists, yoga instructors, wellness practitioners, and wellness coordinators. And they are still growing! That said, they are complete with their expansion… for now!

As they grew from 808 Wellness in the smaller Building B of Rainbow Mall to the larger Building A and became 808 Wellness Center, the expansion to the Studio created a short identity crisis as they began to refer to the new space as The Studio and the original The Center. But isn’t it all the Center? And both most certainly 808 Wellness. Taking into account the often-heard comment, “I didn’t know what 808 Wellness was,” the couple decided it was time for a name revamp to clarify their expanded offerings. The treatment space was named the center has transitioned into the Healing Spa, now creating 808 Wellness Healing Spa & Yoga Studio. The Center is the sum of all the parts: Spa, Studio and Ohana. The 808 Wellness owners and staff member’s intention at this point remains the same: to help assist all who are drawn to find their center through the offerings of 808 Wellness. As Sara says,

“We all go through trials and tribulations in our life. We help wellness and spiritual seekers who have traversed obstacles in their own life by providing tools to facilitate their health and wellness journey. Whether through treatments offering relaxation, restoration, and recovery, yoga classes offering stretching, connection and deepening of one’s practice, or classes and education to enhance one’s knowledge base, we are here as your premier Maui Wellness Destination! Any of our skilled Wellness Coordinators will be able to assist in setting you up with the perfect wellness program customized just for you and your health goals. While we have reached our optimal point of growth in terms of the physical walls of our healing center, the growth within daily feels as if it has just begun. Come enjoy our Wellness Ohana and become a part of our Sacred Sangha. We are here, for you!”